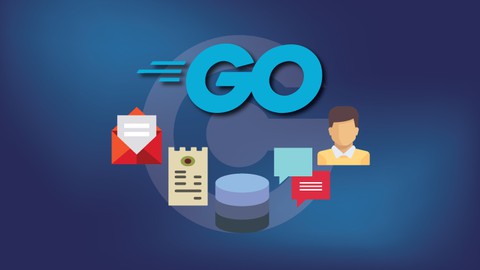 Working with Microservices in Go (Golang)

PREVIEW THIS COURSE - GET COUPON CODE

What you'll learn Working with Microservices in Go (Golang) Course

How to design & develop REST microservices in Golang (Go)https://www.udemy.com › gol...

In this second part of the series I'm working with MySQL, Cassandra and Elasticsearch as persistence layers and we're going to create 3 different microservices .

For a long time, web applications were usually a single application that handled everything—in other words, a monolithic application. This monolith handled user authentication, logging, sending email, and everything else. While this is still a popular (and useful) approach, today, many larger scale applications tend to break things up into microservices. Today, most large organizations are focused on building web applications using this approach, and with good reason.

it is maintainable and testable;

it is loosely coupled with other parts of the application;

it  can deployed by itself;

it is organized around business capabilities;

it is often owned by a small team.

In this course, we'll develop a number of small, self-contained, loosely coupled microservices that will will communicate with one another and a simple front-end application with a REST API, with RPC, over gRPC, and by sending and consuming messages using AMQP, the Advanced Message Queuing Protocol. The microservices we build will include the following functionality:

An Authentication service, with a Postgres database;

A Logging service, with a MongoDB database;

A Listener service, which receives messages from RabbitMQ and acts upon them;

A Broker service, which is an optional single point of entry into the microservice cluster;

A Mail service, which takes a JSON payload, converts into a formatted email, and send it out.

All of these services will be written in Go, commonly referred to as Golang, a language which is particularly well suited to building distributed web applications.

We'll also learn how to deploy our distributed application to a Docker Swarm and Kubernetes, and how to scale up and down, as necessary, and to update individual microservices with little or no downtime.

Sign up here with your email address to receive updates from this blog in your inbox.